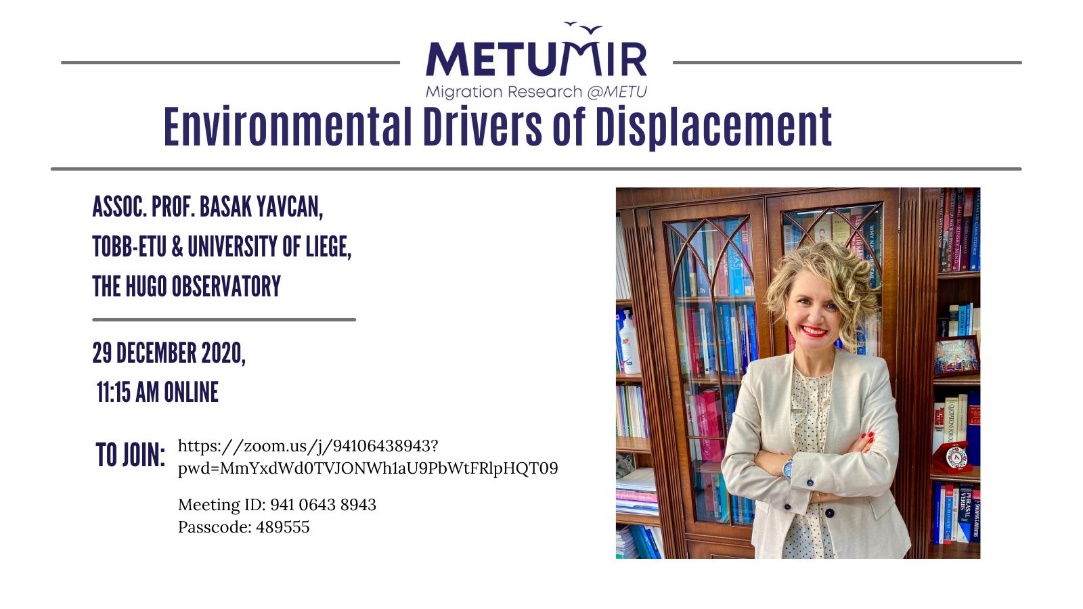 In this webinar hosted by MetuMIR, Başak Yavçan explored the links between environment and migration, including the indirect effects of climate change on mobility.

Evidence vs Myth: Understanding Displacement in a Changing Climate 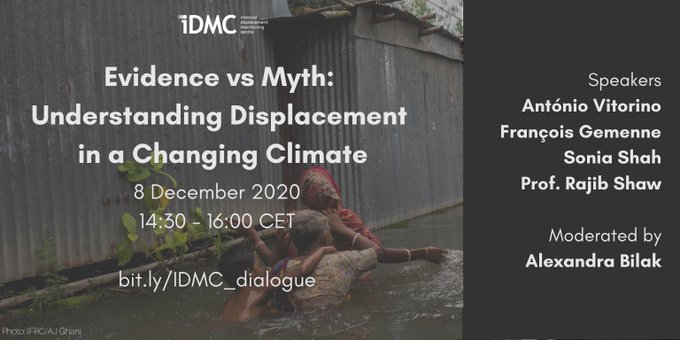 François Gemenne contributed to this virtual dialogue aimed at debunking the myths surrounding climate change and displacement. The event was hosted by IDMC. 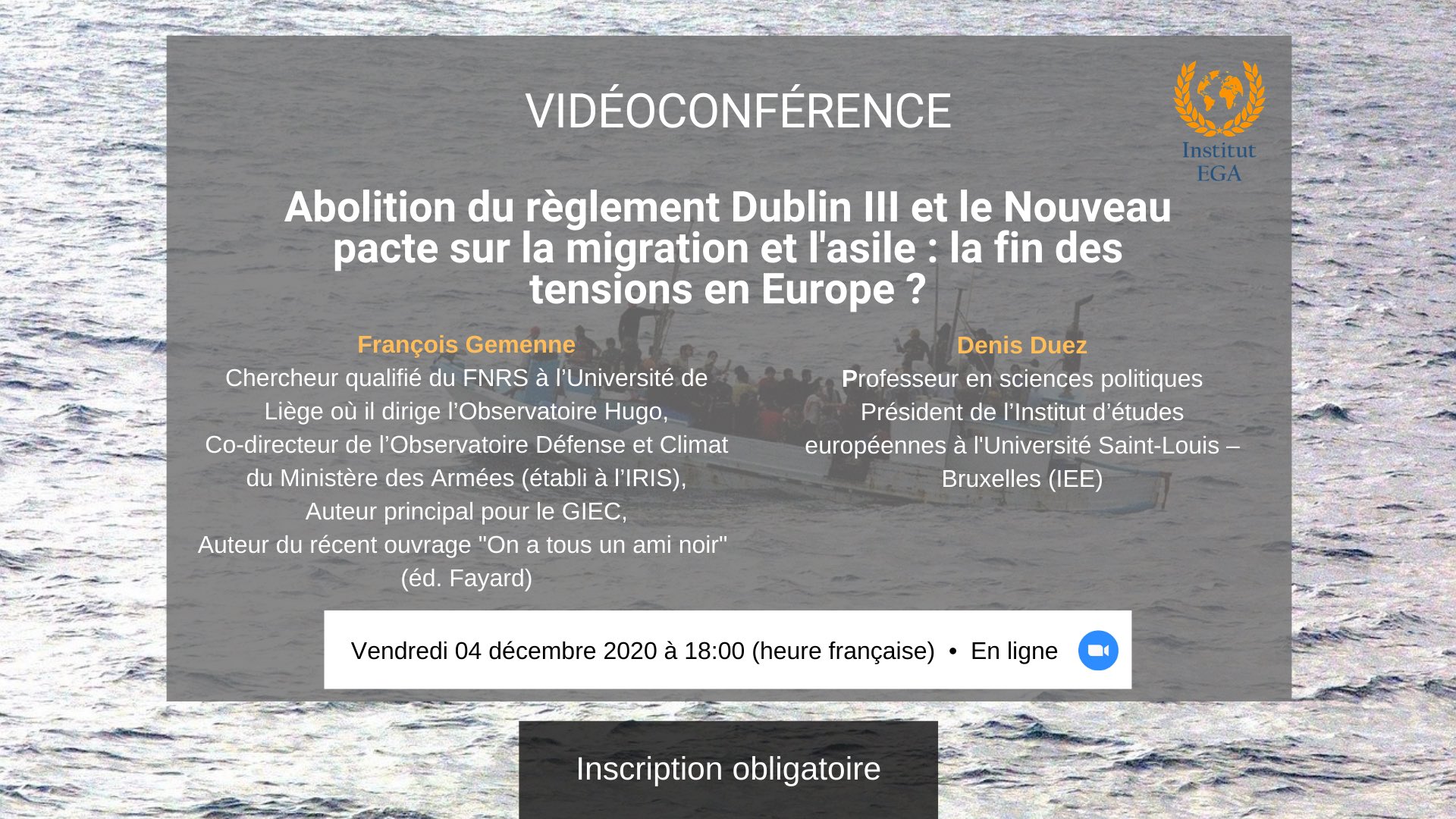 François Gemenne took part in this virtual discussion on the EU's new pact on migration and asylum, hosted by Institut EGA.

Assessing the State of Data and Research on Human Mobility in the Context of Disaster, Climate Change, and Environmental Degradation 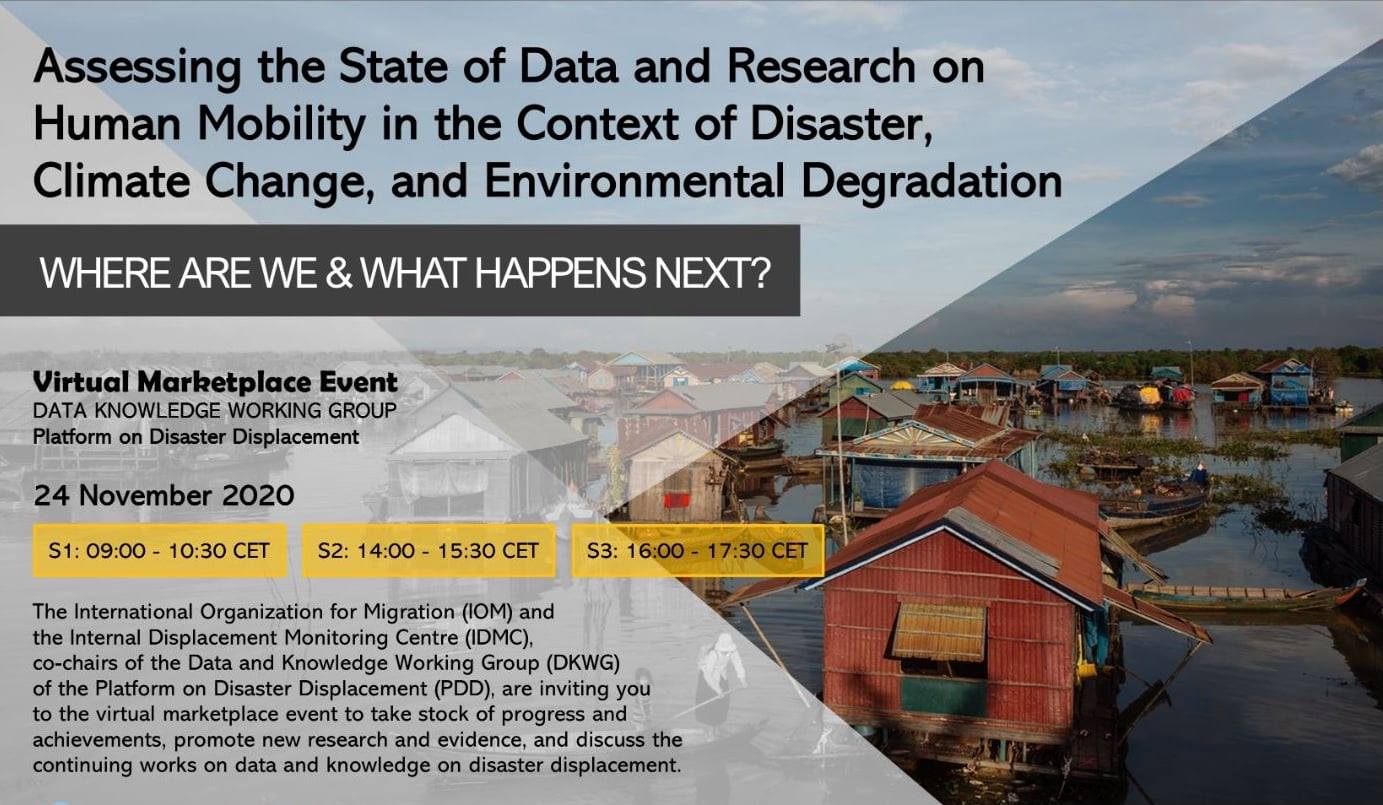 Caroline Zickgraf presented the HABITABLE project as part of this virtual marketplace event on data and knowledge on human mobility in the context of disasters and environmental degradation.

The event was hosted by the Data Knowledge Working Group of the Platform on Disaster Displacement. 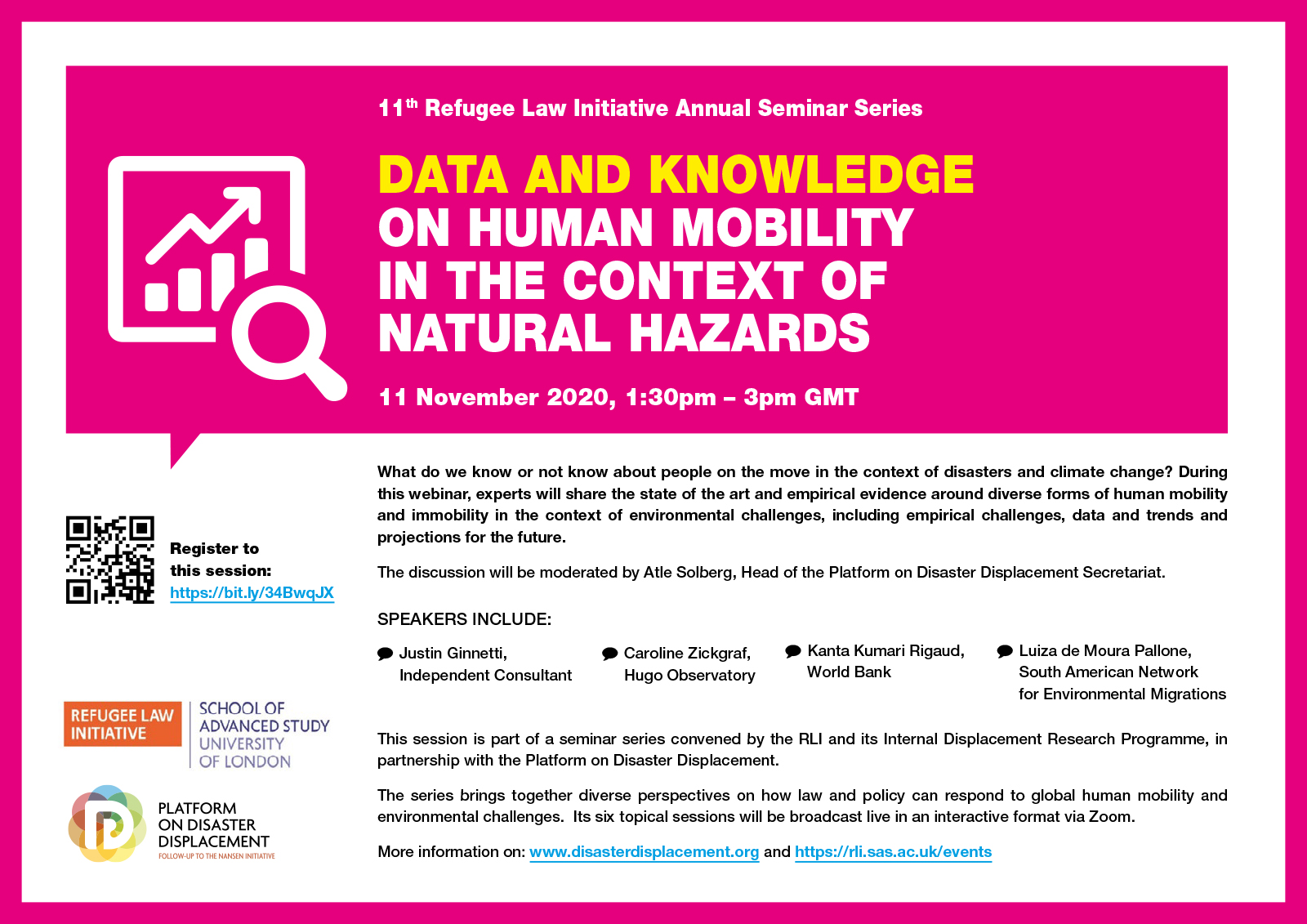 Caroline Zickgraf introduced the structure and objectives of the HABITABLE project as part of this panel discussion on data and knowledge of migration and immobility in the context of environmental challenges.

The webinar was hosted by Platform on Disaster Displacement and is available to re-watch here.

EU's New Pact on Migration and Asylum: An Opportunity for More EU-Turkey Cooperation? 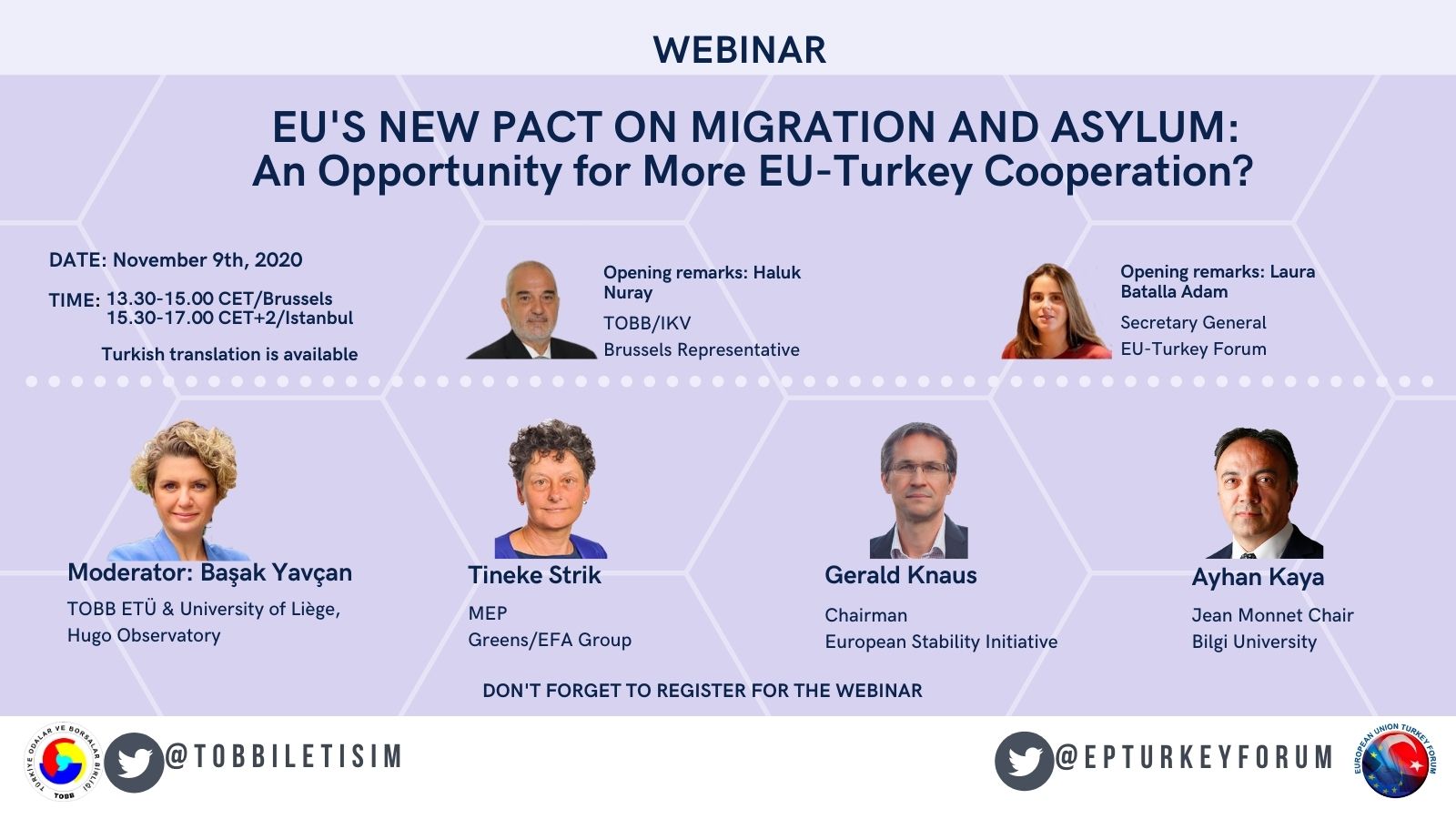 This webinar on the EU's new pact on migration and asylum and its implications for EU-Turkey cooperation was moderated by Hugo Observatory's Başak Yavçan.

The recording of the webinar is available to watch here.

Migration and Climate Change: What Can European Cooperation Achieve? 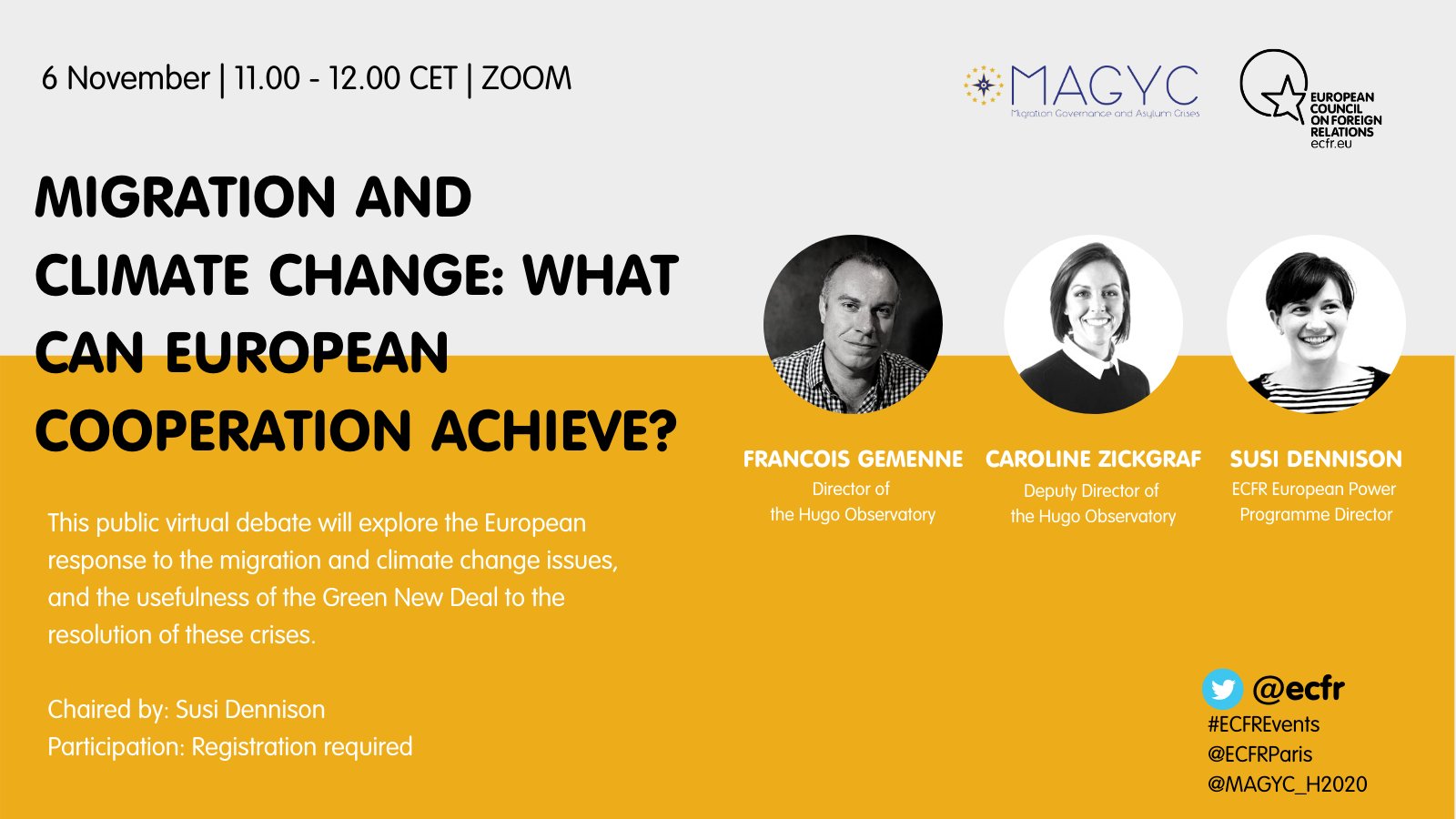 François Gemenne and Caroline Zickgraf took part in this virtual debate hosted by ECFR. The debate sought to answer questions related to European cooperation on migration and climate change, in part by drawing parallels with the European response to the covid-19 pandemic.

Watch the recording of the debate here.

Comparing Crises: Lessons from ,Migration Crises' in the European Neighbourhood 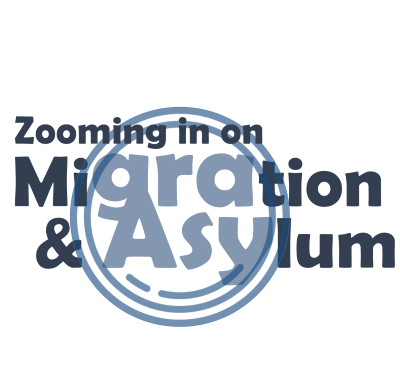 The MAGYC project hosted a webinar as part of the H2020 webinar series "Zooming in on Migration and Asylum". It featured panelists from the MAGYC project as well as Seawatch Germany and ADMIGOV.

The recording of the webinar can be accessed here. 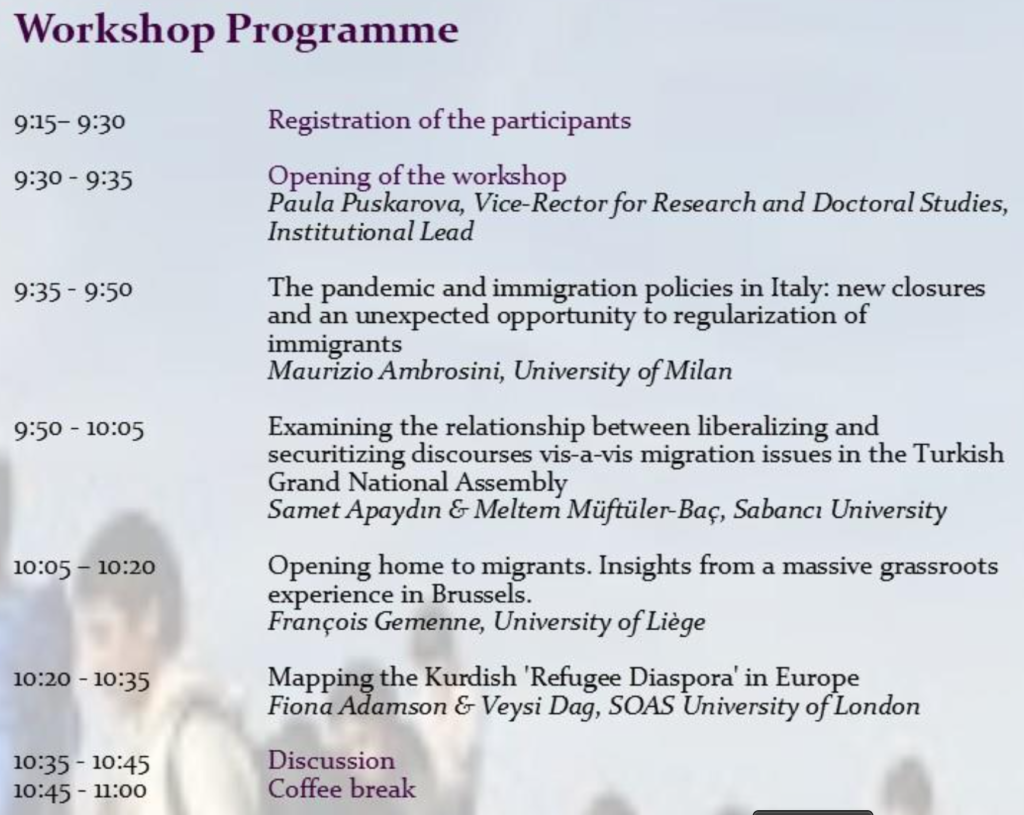 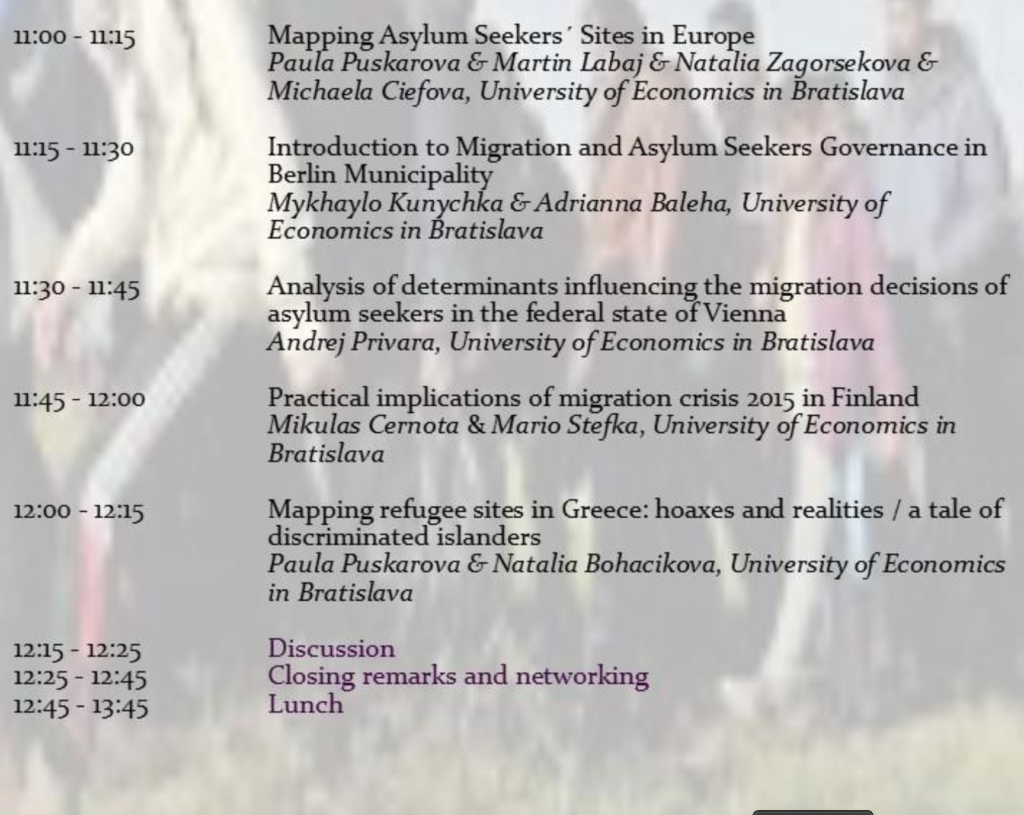 This online workshop was co-hosted by the MAGYC project and EUBA as part of the H2020 webinar series "Zooming in on Migration and Asylum". Register for the webinar series here. 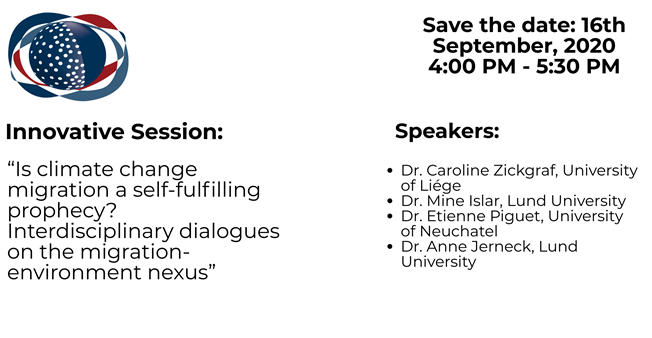 As part of the 2020 Virtual Forum on Earth System Governance, the HABITABLE and MAGYC projects co-facilitated this innovative session on the migration-environment nexus. The aim of the session was to facilitate a better dialogue between migration scholars and the climate change research community. 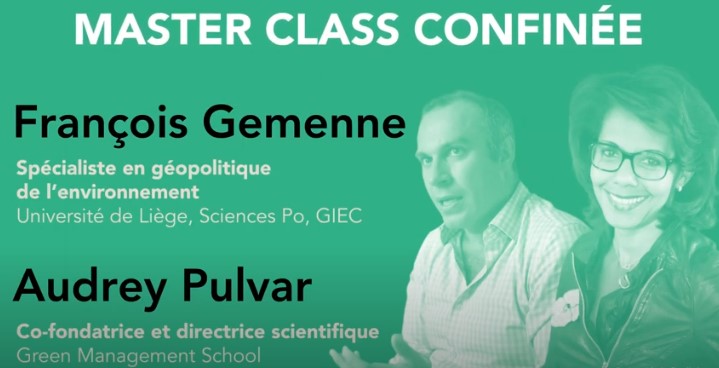 In our projections of the "next world", don't we tend to forget the realities of today's world and the deep aspirations for a return to the "world before"? This is what François Gemenne (The Hugo Observatory) and Audrey Pulvar (Green Management School) discussed during this webinar organised by the recently created Green Management School. 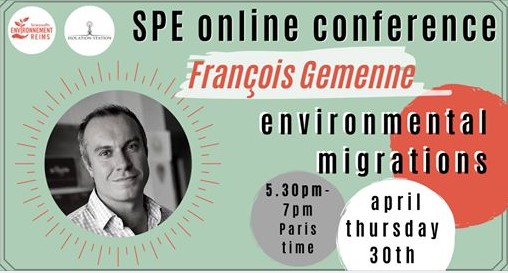 François Gemenne (Dir. at The Hugo Observatory) was invited by Sciences Po Environnement student association to talk about environmental migrations and answer the audience questions. 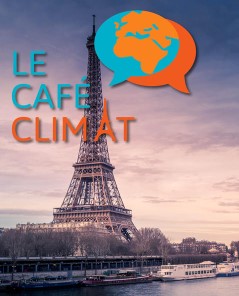 In the frame of an online "Café Climat", the Parisian Climate Agency proposed a reflexion on the relation between the climate crisis and the sanitary crisis of the coronavirus. François Gemenne (Dir., The Hugo Observatory) and Anne Souyris (Deputy Mayor of Paris in charge of health and relations with the Public Assistance of Paris Hospitals - APHP) were invited to participate in the reflexion and explore solutions to make the current situation a lever for accelerating the ecological transition in Paris. 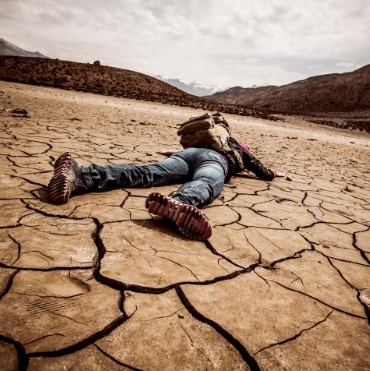 François Gemenne (Dir. at The Hugo Observatory) took part in a hearing organised by the European Economic and Social Committee on the possible international actions for people displaced for environment-related causes. The hearing, held online due to coronavirus measures, brought together EESC members, representatives of environmental and international organisations and academics specialising in law.

Is green growth possible in the post-coronavirus period ? What economic model are we heading towards ? François Gemenne was interviewed by Marie Visot, journalist at Le Figaro, in a webinar organised by the Institut de l'Economie Positive. 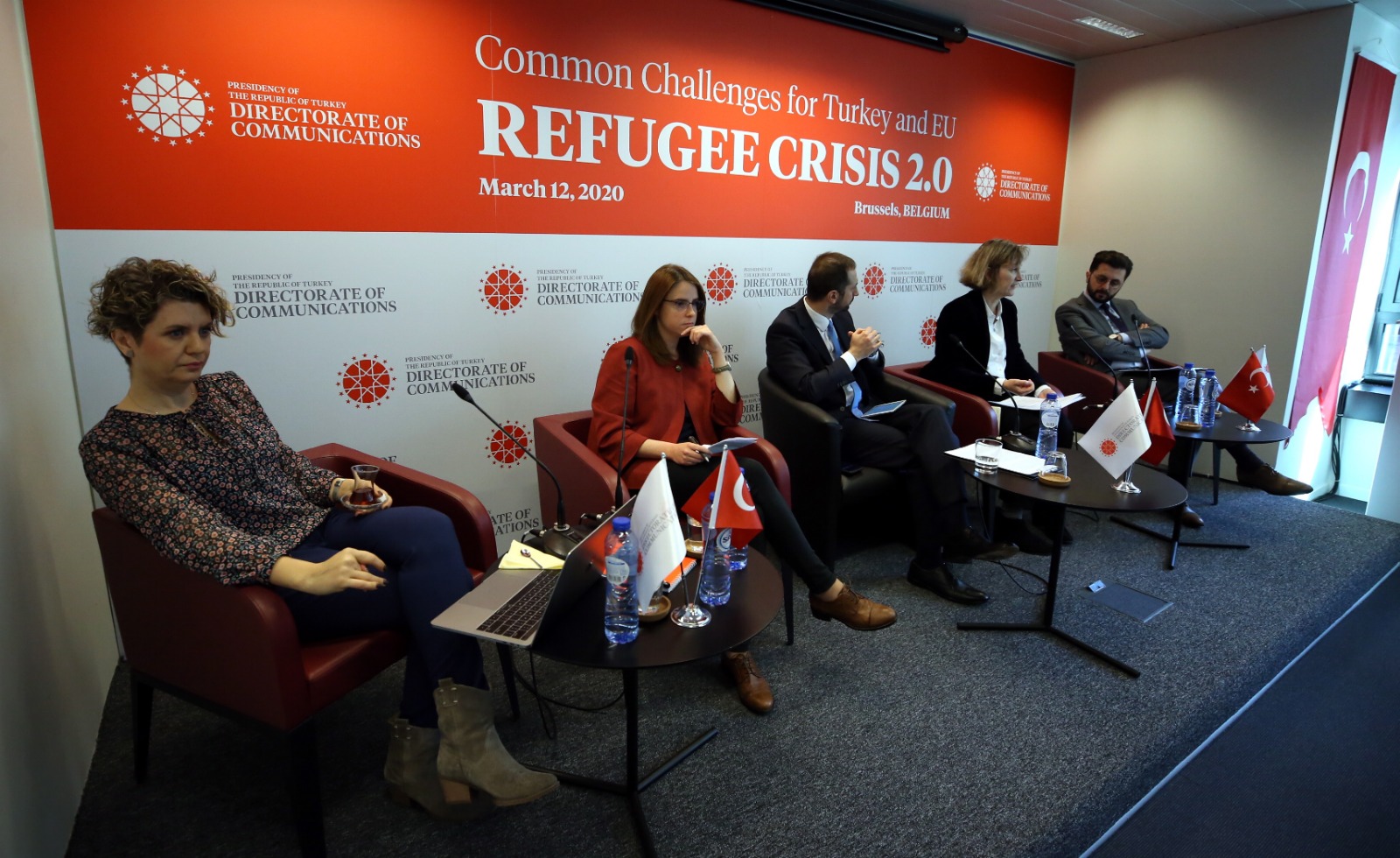 Başak Yavçan (left) and other panelists

Başak Yavçan (Hugo Observatory, MAGYC) took part in a panel discussion on the Syrian refugee crisis organized by the Turkish Directorate of Communication. The panelists discuss the future of the EU-Turkey Deal, a potential "New Deal" and mechanisms to promote cooperation and responsibility sharing.

Conference on Migration Policies in the Mediterranean and Libya

MAGYC partner Sciences Po (CERI) organized a series of roundtables on "Crimes, Victims ans the rule of International Law" in the broader context of Migration policies in the Mediterranean and Libya.

This conference brought together practiotioners and academics (including MAGYC researchers Hélène Thiollet, Shoshana Fine, Céline Cantat, Virginie Guiraudon, Iraklis Dimitriadis) to debate the role of law in governing migration. It reflected upon il/legalising practices and the making of "victims" and "criminals" in a context of continuous migrants' deaths sand dismantlement of search and rescue operations led by States or NGOs.

This event was organized by researchers of the MAGYC project and of the ANR project PACE (Politics of Asylum Crisis in Europe), in partnership with the Paris School of International Affairs. 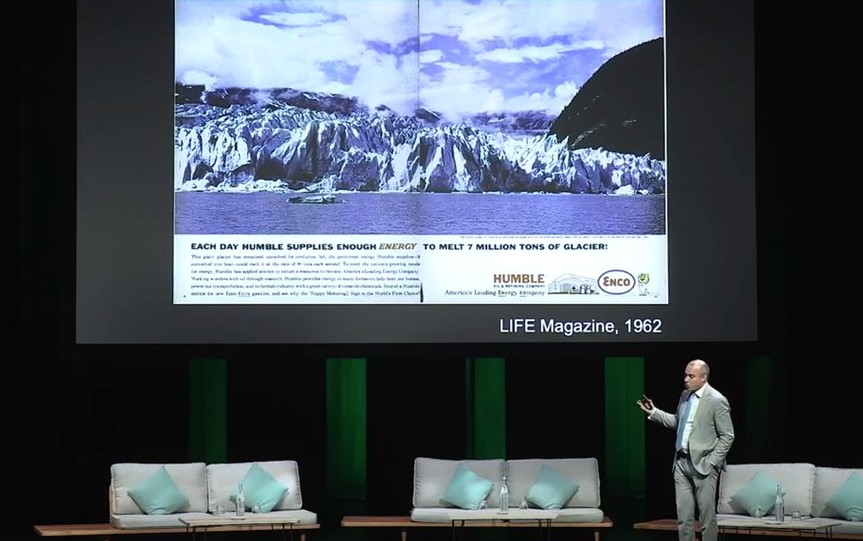 A video of François Gemenne's intervention is available here.

The MAGYC team attended a Horizon 2020 cluster meeting on migration governance organised by the European Research Agency together with other researchers from other migration projects RESPOND, MIGNEX, AGRUMIG, ADMIGOV, CEASEVAL and CrossMigration.

This two-day event served as a valuable opportunity for each project team to introduce their works, share insights and lessons learned from their research, explore synergies and potential collaboration opportunities, and exchange with policy officials from the European Commission.

Conference on Climate Change Impacts and Consequences on Migration 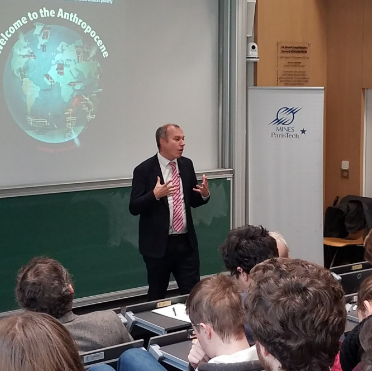 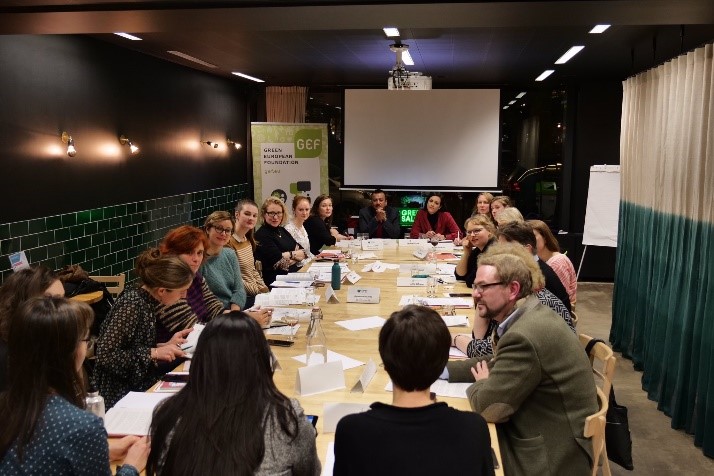 Caroline Zickgraf was invited as a guest speaker at the Green European Foundation’s Green Salon to debate a green vision for migration.