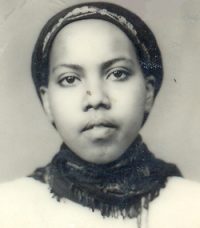 Amina SAID CHIRE is geographer, researcher and lecturer at the University of Djibouti since 2005. She is specialized in East African nomadism, migration and the associated risks and vulnerabilities. She is an expert in urban development and social development and has conducted numerous studies on both domains (social protection, gender, political and democratic governance, responsible tourism, impact assessments of urban development projects, vulnerability and resilience). As an author of numerous articles she has coordinated and participated to the realisation of reference works on the Republic of Djibouti, among which l’Atlas de Djibouti (2007, Editions du Jaguar), Djibouti contemporain (2012, Editions Karthala) and Le nomade et la ville à Djibouti (2012, Edition Karthala). In 2008 she has received the Albert Bernard award of the Académie Française des Sciences d’Outre-Mer for the  Atlas de Djibouti and in 2013 for  Le nomade et la ville à Djibouti.