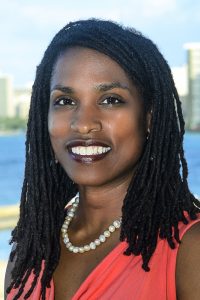 Maxine Burkett is a Professor of Law at the William S. Richardson School of Law, University of Hawaï and a Global Fellow at the Woodrow Wilson International Center for Scholars. An expert in the law and policy of climate change, she has presented her work on diverse areas of climate law throughout the United States and in West Africa, Asia, Europe, and the Caribbean. Her work has been cited in numerous news and policy outlets, including BBC Radio, the ABA Journal, the New York Times, and Nature Climate Change. From 2009-2012, Professor Burkett also served as the inaugural Director of the Center for Island Climate Adaptation and Policy (ICAP).  Professor Burkett received her B.A. from Williams College and Exeter College, Oxford University, and received her law degree from the University of California, Berkeley. Burkett is Vice-Chair of the Global Greengrants Fund Board of Directors, is a member scholar of the Center for Progressive Reform, and is a member of the Federal Advisory Committee for the Sustained National Climate Assessment. She was a 2016 recipient of Williams College’s Bicentennial Medal for distinguished achievement.