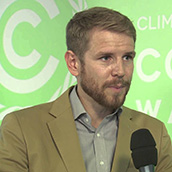 David J Wrathall is an assistant professor at Oregon State University’s College of Earth, Ocean and Atmospheric Sciences at Oregon State University, where he investigates the relationship between climate change and human migration. His primary focus is communities at sea level in vulnerable developing countries, where storm surge, catastrophic flooding and erosion are rendering spaces uninhabitable and unproductive. These cases, of course, are present-day analogs for future sea level rise, and David investigates these cases to learn how climate change may shape the spatial distribution of the human population. David’s research pokes and prods the “migration as adaptation to climate change” hypothesis: understanding how different vulnerable people migrate differently, how national political economies shape labor opportunities of vulnerable people, and how local resource politics in both sending and receiving areas impinge on migrants’ ability to earn wages. David holds a PhD in geography from King’s College London, following which he was a National Science Foundation post-doctoral researcher at the University of California Santa Cruz. Most recently David was an associate academic officer at United Nations University – Institute for Environment and Human Security, where he was a close observer of climate policy around migration, as it has recently taken life in the UNFCCC.