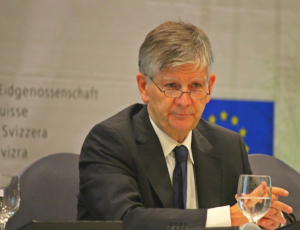 Walter Kälin is Professur Emeritus of constitutional and international law at the University of Bern and former Director of the Swiss Centre of Excellence in Human Rights (SCHR). He is a member of the Expert Group on Non-Economic Losses of the Executive Committee of the Warsaw International Mechanism for Loss and Damage and Advisor to the Chair of the Platform on Disaster Disolacement. Furthermore, he is a member of the ILA Committee on Sea Level Rise. From 2012 to 2015 he was Envoy of the Chairmanship of the Nansen Initiative on disaster induced cross-border displacement. From 2004 to 2010 he was Representative of the UN Secretary General on the Human Rights of Internally Displaced Persons. Other positions include Member UN Human Rights Committee (2003 – 2008 and 2012 – 2014), Member UN Peacebuilding Fund Advisory Board (2012 – 2014), Special Rapporteur of the UN Human Rights Commission on the situation of human rights in Iraqi occupied Kuwait (1991/92) and  Co-Rapporteur ILA Committee on Refugee Procedures (1995 – 2002). His main research areas are human rights law and the legal protection of displaced persons, including in the context of disasters and climate change.