Series of Lectures by Roger Zetter

Prof. Emeritus Roger Zetter, (Former Director of the Refugees Studies Centre, University of Oxford and Founding Editor of the Journal of Refugee Studies), held a series of lectures on environmental migration as part of the EDGE (Environmental Diplomacy and Geopolitics) project, implemented under the Horizon 2020 programme by the University of Liège, the University of Economics in Bratislava (EUBA) and Sciences Po Paris. Part of this project’s planned activities include the hosting of a rotating Chair in Environmental Diplomacy by each partner institution. Professor Clive Hamilton (Charles Sturt University, Australia) had served as the first EDGE Chair, followed by Dr. Alex de Sherbinin (Columbia University, USA). Professor Zetter then took over as the last rotating Chair under the EDGE project.

First lecture: Refugee Labelling – Why They Are Not Climate Refugees
(November 8th, 2018, at the University of Liège (Main Campus)

This lecture presented the different labels used in policy discourses to describe people on the move, and specifically the different construction stages (forming, transforming, politicising) of the term “climate/environmental refugee”, widely used to describe people moving due to environmental/climate stressors. This lecture sought to deconstruct this label through assessing its different conceptual, normative, and empirical challenges. 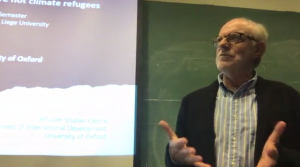 Drawing from the specific examples of Bangladesh and Ethiopia, this lecture analysed the way in which political powers (at the macro-state and micro-local levels) deal with population displacement in the context of climate change, and how political recognition does not always result in legal and normative solutions aimed at bridging the protection gap for affected populations. 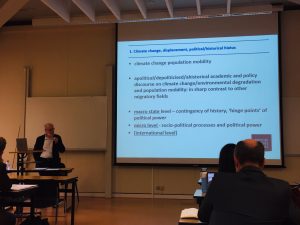 Third lecture: From Humanitarianism to Development: The Political Economy of the “New” Refugee Regime
(November 22nd, 2018 at Le Bocholtz, Liège)

This lecture sought to explain the ways in which the international refugee regime has been shifting from a purely humanitarian approach towards a more development-oriented approach, presenting new development approaches, structures, actors, funding mechanisms and instruments that are forming part of a new paradigm presented as “the humanitarian-development nexus”. Through a political economy perspective, this lecture presented the implications of this new paradigm on economic, socio-economic, as well as political agendas.

The lecture was followed by a roundtable on “migration governance in the European Union” chaired by Dr. Caroline Zickgraf (Deputy Head of The Hugo Observatory), which featured Dr. Katarina Cséfalvayová (Chair of Slovakia’s Foreign Affairs Commission), Dr. Fiona Adamson (Associate Professor at SOAS) and Dr. Christiane Fröhlich (Research Associate at the German Institute of Global and Area Studies (GIGA)).

The evening ended with a cocktail reception to celebrate Professor Roger Zetter’s appointment as EDGE Chair, as well as the Hugo Observatory’s second anniversary and the launch of the new European project “MAGYC” on Migration Governance and Asylum Crises. 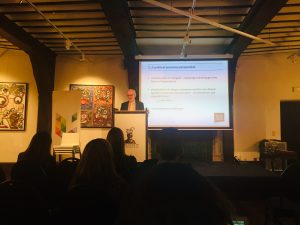 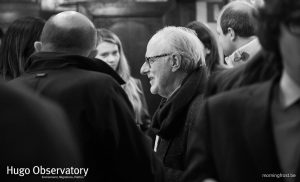 This lecture started by tracing the evolution of the concept of “policy coherence”. Prof. Zetter then presented the preliminary findings of an ongoing evaluation of Finland’s development policy’s coherence with regards to its targets on forced displacement. He further shared a theoretical framework and methodological tools to be used by Master and PhD students in their research work. This fruitful and interactive session was specifically targeted at Master students of the University of Liège’s Arlon Campus. 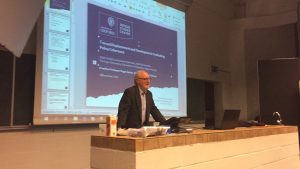