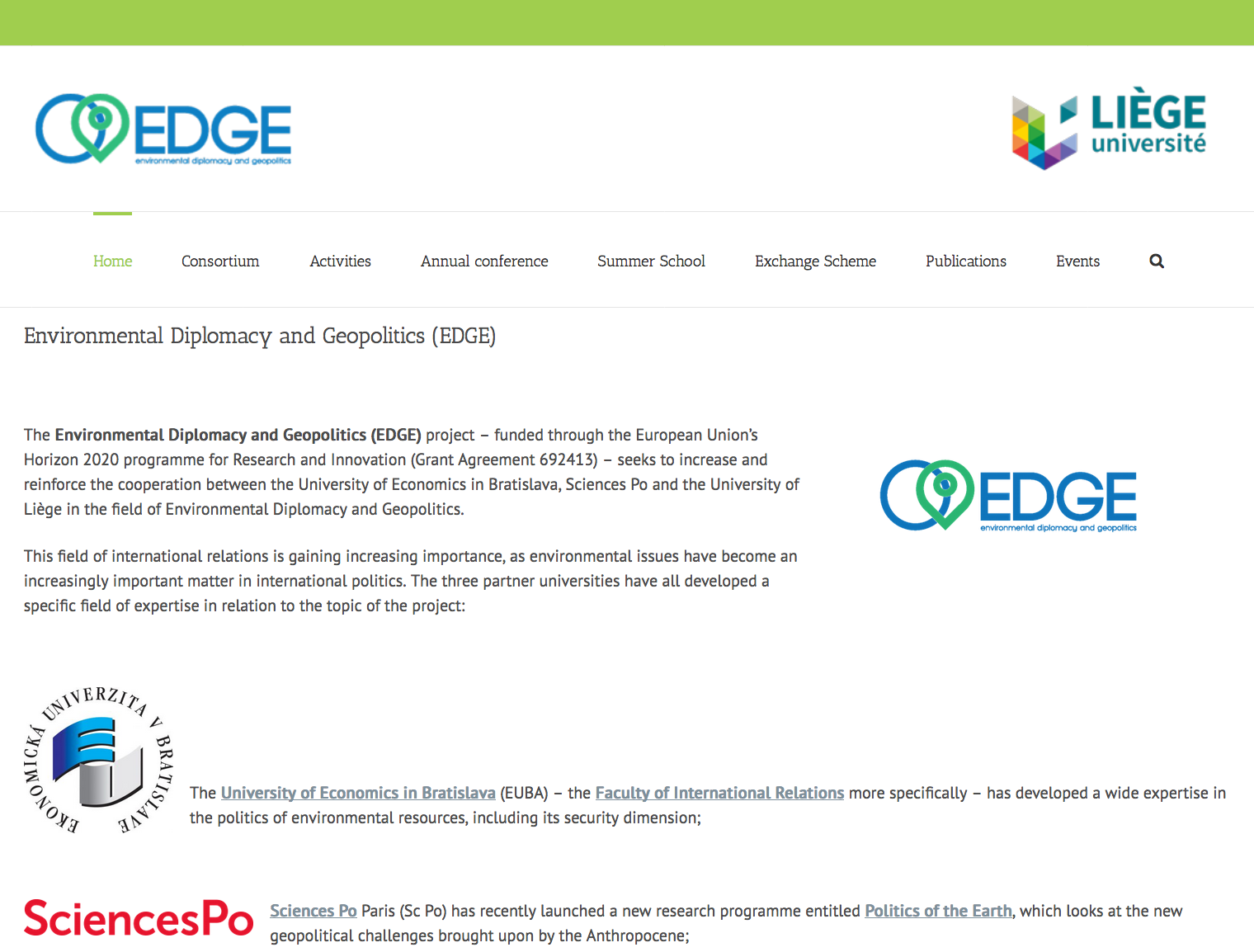 The EDGE project – funded through the European Union’s Horizon 2020 programme for Research and Innovation (Grant Agreement 692413) – seeked to increase and reinforce the cooperation between the University of Economics in Bratislava, Sciences Po and the University of Liège in the field of Environmental Diplomacy and Geopolitics.

This field of international relations is gaining increasing importance, as environmental issues have become an increasingly important matter in international politics. The three partner universities have all developed a specific field of expertise in relation to the topic of the project:

Thus the areas of expertise of the three partners covered a wide range of subjects related to environmental diplomacy and geopolitics: resources, politics and impacts. The key objective of this partnership was to bring these areas of expertise together to create a comprehensive and consistent cluster of research and teaching activities.

All activities under the EDGE project took place between 2016 and 2018.

EU FP7 project led by the University of Exeter

At HELIX we assisted decision-makers and the research community in making adaptation to our changing climate more understandable and manageable by providing a set of credible, coherent, global and regional views of different worlds at 2, 4 and 6°C, and now 1.5°C. The project focused on delivering the knowledge needs of Northern Sub-Saharan Africa, South Asia and Europe. The Hugo Observatory of the University of Liège was tasked with understanding the human impacts of extreme climate change, specifically on future migration scenarios. The project seeked to understand whether the destinations of migrants change, whether people are more likely to migrate, or rather less able to do so due to the decreasing availability of natural resources. To this end, we performed case studies in Senegal, Benin, Tanzania and Bangladesh. We studied contemporary migration patters and by means of biophysical and socio-economic models we created future migration scenarios.

Environmental change is one of the major concerns for the international community. Although precise estimates are unavailable, it is commonly understood that due to changes in the environment, more and more people will migrate in coming years, in particular within and between developing countries. At the same time, migration will most likely have a growing impact on the environment. For example, internal migration to cities is expected to continue to increase. Today, over half of the world’s population lives in urban areas, many of which are in coastal areas and are particularly vulnerable to sea level rise. The effects of these changes will vary and the impact will differ between each region of the world.

Despite a growing body of studies on the topic of migration, environment and climate change, there is still a lack in reliable data and policy oriented research which can respond to the increasing demand and reflect the needs of policymakers.The MECLEP project filled an important gap as it was a policy oriented programme of work.

The project aimed to contribute to the global knowledge base on the relationship between migration and environmental change, including climate change. The innovative research formulated policy options on how migration can benefit adaptation strategies to environmental and climate change. Case studies and household surveys were conducted in the Dominican Republic, Haiti, Kenya, Mauritius, Papua New Guinea and Viet Nam. The Hugo Observatory was in charge of the case study in Mauritius as well as the comparitive report. Hugo Observatory director François Gemenne acted as Global Research Coordinator of the MECLEP project.